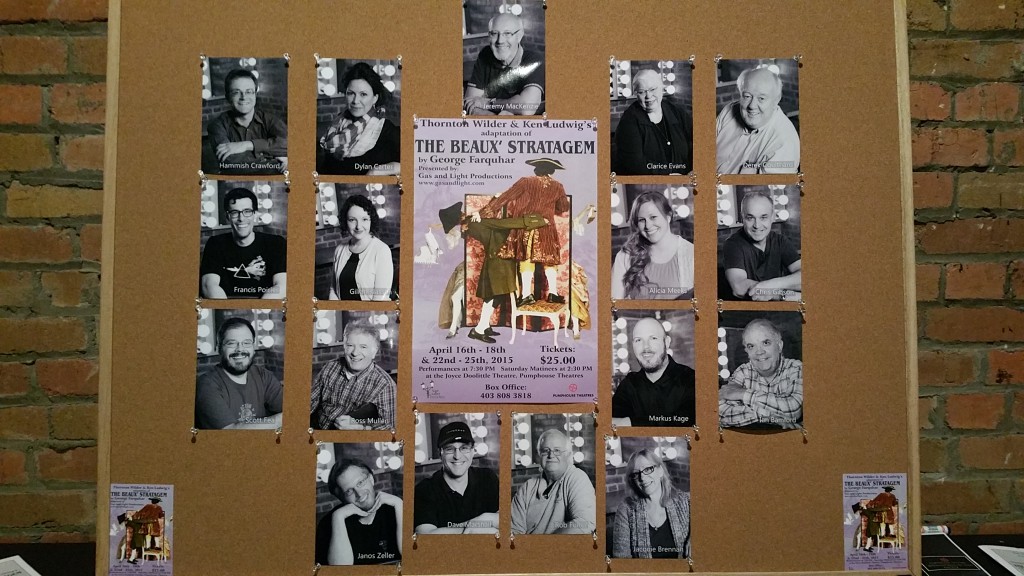 I am cast as the main character Sullen (not the main character). Sullen is unhappily married but is a dutiful husband who would rather be drinking. Rehearsal’s go from Feb 1 to beginning of April, performing April 16-25 2015.

The Beaux’ Stratagem is a comedy by George Farquhar, first produced at the Theatre Royal, now the site of Her Majesty’s Theatre, in the Haymarket, London, on March 8, 1707.[1] In the play, Archer and Aimwell, two young gentlemen who have fallen on hard times, plan to travel through small towns, entrap young heiresses, steal their money and move on. In the first town, Lichfield, they set their sights on Dorinda. Aimwell falls truly in love, and comedy ensues. Foigard, a priest and chaplain to the French officer, is actually an Irish priest called MacShane (a sombre version of the stage-Irish stereotype).

Aimwell and Archer are two fashionable beaux, on the lookout for an heiress to marry so they can repair their fortunes. To help their scheme, Archer poses as Aimwell’s servant when they arrive in the city of Lichfield. Aimwell insinuates himself into friendship with the beautiful Dorinda, daughter of Lady Bountiful. Meanwhile, Archer strikes up an extremely worldly friendship with Kate, Dorinda’s sister-in-law. She’s unhappily married to Sullen, a parody of a country squire, mad for hunting and eating and (especially) drinking.

Obstacles to a happy ending include the fact that Kate’s husband despises her; that the innkeeper’s saucy daughter, Cherry, has fallen in love with Archer; that Lady Bountiful, who is extremely over-protective of Dorinda’s virtue, mistakenly believes herself to be a great healer of the sick, while a band of brigands plans to rob Lady Bountiful that very night.

Frontispiece of the first edition of The Beaux’ Stratagem, which introduces the characters